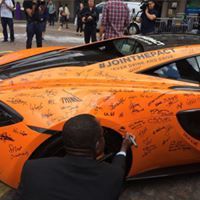 Why did Paul have Timothy get circumcised?

3 Paul wanted Timothy to accompany him, and he took him and circumcised him because of the Jews who were in those places, for they all knew that his father was a Greek.

Who wrote the book of Romans?

22 I Tertius, who wrote this letter, greet you in the Lord.

Was Simon who used to be a sorcerer truly saved?

13 Even Simon himself believed, and after being baptized he continued with Philip. And seeing signs and great miracles performed, he was amazed.

Why did the 'disciple whom Jesus loved' not reveal his name in the passages where he is mentioned?

7 That disciple whom Jesus loved therefore said to Peter, "It is the Lord!" When Simon Peter heard that it was the Lord, he put on his outer garment, for he was stripped for work, and threw himself into the sea.

Is the land of Israel spoken about in the bible the same land occupied in 1967 by the present day Israel?

21 And he rose and took the child and his mother and went to the land of Israel.

What was the significance of the bones of Joseph being carried away from Egypt?

32 As for the bones of Joseph, which the people of Israel brought up from Egypt, they buried them at Shechem, in the piece of land that Jacob bought from the sons of Hamor the father of Shechem for a hundred pieces of money. It became an inheritance of the descendants of Joseph.

8 Remember Jesus Christ, risen from the dead, the offspring of David, as preached in my gospel.

How many children did Noah have?