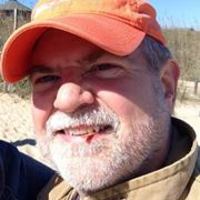 Does a lifelong struggle with a persistent sin mean one was never really saved to begin with?

Is tarot card reading a sin?